I had a few moments of doubt as to what I had let myself in for, as I arose in the dark before 4am on my first full day in San Pedro de Atacama. My little hotel was out on a dusty road at the edge of town and the rickety corrugated iron gate looked like it would not budge. A mild, unwarranted, travel-fear induced panic came upon me as I fumbled in the pitch black with my torch. With a bit of slow breathing and logical thought, I was soon out onto the ‘street’ ridiculously early. Panic over. I was soon joined by other folk as we all wondered why we were doing this. Two minibuses came and went (along with 45 minutes) before one finally arrived with my name on their list. I could have slept for another hour!!

It was pretty darn chilly out, hovering well below freezing in the high, thin air. But, after wheeling around the streets of San Pedro in a seemingly endless search for passengers (some not ready on time) we rolled out of civilisation at 6am and the driver cranked up the heat. Within minutes we were gentle roasting at 25degs as we battled altitude dehydration and ferocious compulsory bus seatbelts. In my already fuzzy & pre-dawn addled head, I pondered if the prospective beauty of a dawn arrival may be rapidly diminishing after all the delays. I supped on my water. 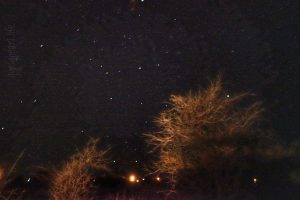 The drive in darkness was a good hour or more. 98kms to the border of Bolivia up against the base of volcanoes is where you will find the El Tatio geysers – said to mean ‘old man crying’ in Quechua. This is the 3rd largest field in the world and sits at 4320masl where the groundwater meets a lava field and throws high plumes of steam and boiling water to the heavens. Sitting in the stifling heat of my seat, the effects of the altitude began to become more marked as we climbed gently to the Andean heights. Ahead on the road was a fairy chain of tail-lights from all the buses on the winding road. As the sky partially lightened to pre-dawn velvet blue, the view to the east revealed the craggy outline of the mountains and a slither of a new moon rising. It was really quite stunning but my head was pounding. By the time we hit the rise above the gates to the fields, the light was sufficient to see them stretching mistily below us; buses everywhere and soft fumeroles of steam rising to the brightening skies. We paused to pay for entry and arrive. But the mental & corporeal battle to deal with the looming sensation of our altitude was hard to ignore.

I felt weighted down and breathless – almost like the onset of a panic attack. Walking was a trial & I felt weirdly dizzy.

At -5degs it would be really nice to feel energetic enough to get warm, but no. Everywhere about little caterpillars of groups are silhouetted against the billowing steam in the soft light. There was little to govern safety in amongst the bubbling pools & spouts of hot liquid (other than common sense!) but an attempt has been made to create subtle paths by laying out rows of brightly painted rocks as boundary lines. Even then there are idiots who ignore them!

We were told that, in the 60’s, the geothermal fields were exploited for their seemingly limitless natural power. Off in the near distance toward the slopes of the volcanoes on the border, an antiquated ‘steampunk’ contraption stands in rusting isolation; evidence of that attempt. It didn’t end well – death & disaster and a geyser that took 30 days to cap! It took until the advent of better tech in the early 2000’s for them try again, only to have a similar result. At that point the local native folk – closely related to the Atacamenos of San Pedro – put in a claim on exploitation of their sacred lands and the government granted a 30yr lease to them. They now control the endless flow of tourism to El Tatio. 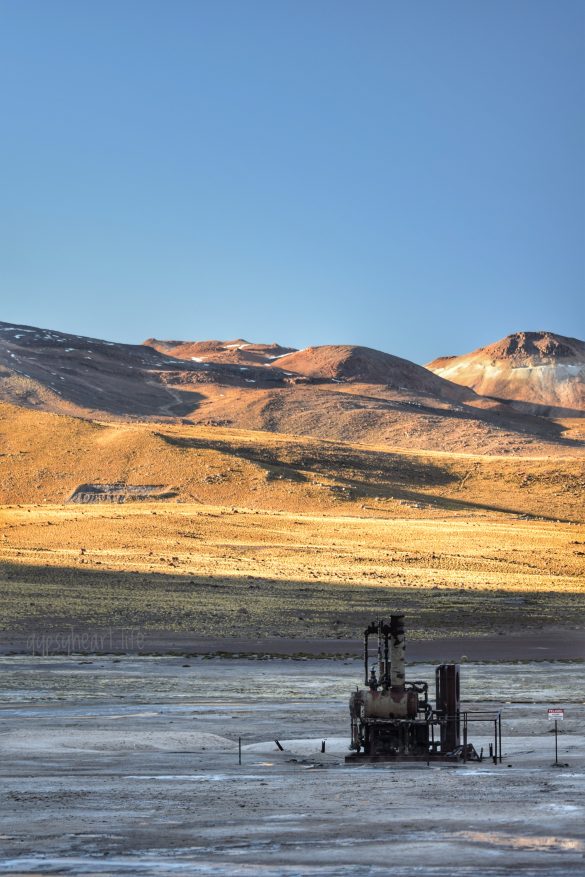 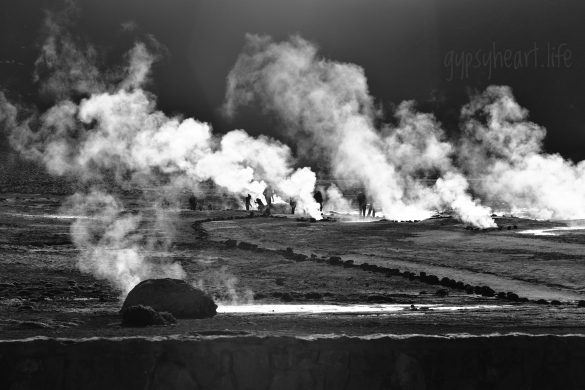 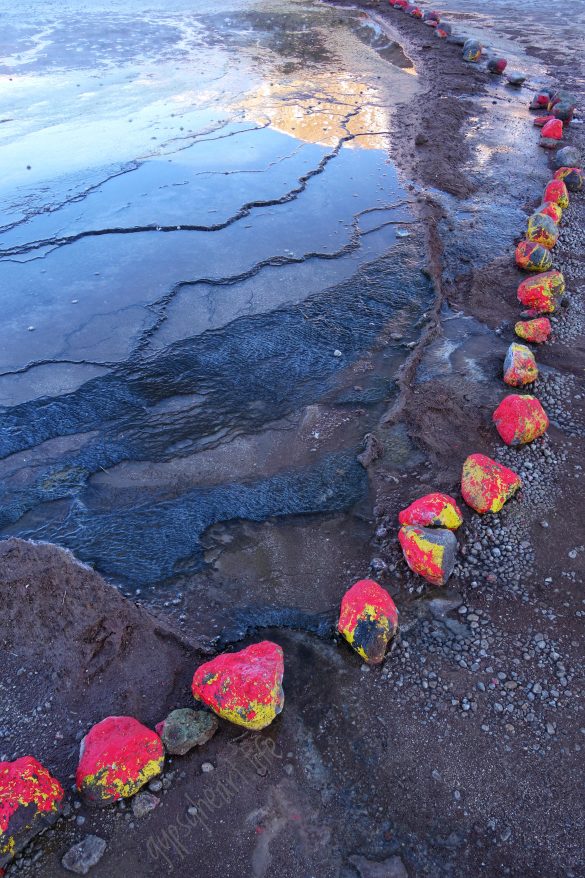 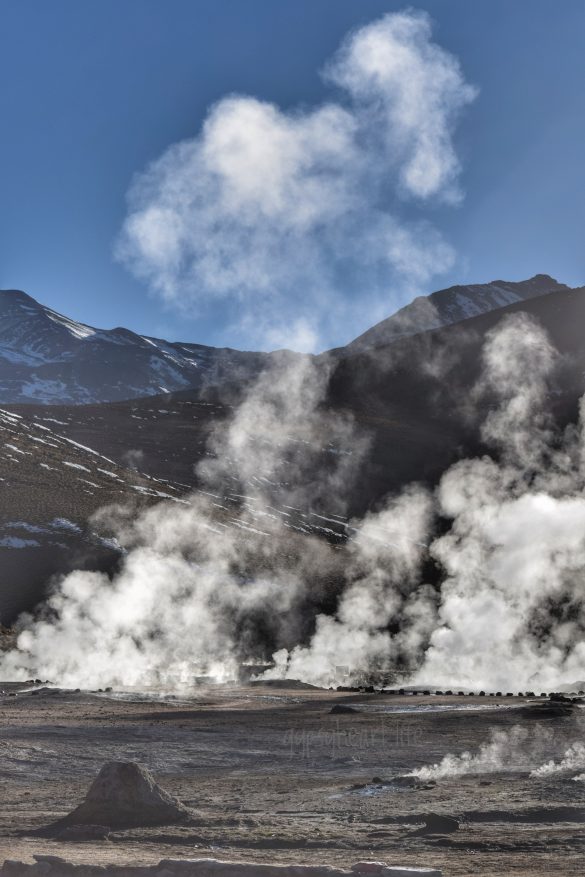 Left to wander free amongst the grey pools lined with mineral silt and shimmering menace,  I just wish that I felt more lively. I should be much more bowled over by the photographic opportunities rather that listless and uninspired. As the sun begins to burst over the mountain’s shoulder and outline the scene below, that first warmth is a little blessing. The next is a breakfast ‘buffet’ set out on a table behind our bus. Sustenance of campfire scrambled eggs and flatbreads with coca tea to combat the ill-feeling takes a little of the edge off the altitude – sort of! Possibly the immense restriction of 3 extra clothing layers is not helping my squiffiness? If only I hadn’t bothered to factor in my swimming costume beneath it all! Delays mean we will not visit the thermal baths on the return.

We packed up our trestle and load into the bus for the trundle home across my first taste of the well-illuminated landscape of the high Atacama. It was a battle to stay upright & alert, if I m honest – I’d much rather have closed my eyes and try to ignore the thrumming, migraine-style headache.

But I may never be here again, so I set my mind to lift against the sensation.

Join me for the rest of the day’s sights soon