At the age of 52, I have just returned from a trip that felt like the biggest I have done for a very long time. I took myself from the Chilean Atacama across into Bolivia to trail across the desert and the salt flats up to the highest capital in the world, La Paz. From there I ‘turned left’ and headed for Lake Titicaca into Peru and the Sacred Valley of the Incas. Machu Picchu was a life goal. Unable to resist the relative proximity, I tacked on an 8-day cruise through the West, Central & Eastern islands of the Galapagos archipelago; stopping in Quito on the way.

I guess that it was the biggest I’ve done in some simple ways. It was the longest ‘planned’ trip I have taken alone in some 15yrs, perhaps my whole adult life – almost 5 weeks travelling constantly with something to do on pretty much every day. Also, it was the most costly I have paid for upfront in many years – but worth every penny.

On a more abstract level, it was the most adventurous – if you define adventure as going to places that throw you out of your comfort zone. Not only was I in totally new territory, visiting a continent on which I have never set foot before, but I was venturing into regions that people seemed to deem ‘risky’ for a solo woman to be traversing. People baulked at the thought of me facing Bolivia alone. Language could well have been a  barrier. Whilst my French is relatively fluent and that helps me with Spanish, I knew I might be in remote places where there was little to help me or where the dialect might throw me. And.. I was potentially pushing myself physically to do things that I was concerned I could not comfortably do. Altitude, hill climbs, snorkelling in deep water, leaping (?) in and out of boats in open seas, facing wild animals at close range… all of these things had the potential in my not-so-physically-confident mind to be overwhelming or even un-doable!!

After almost 9mths of real planning and a lifetime of dreaming, I reached the launch time in a lather of self-doubt and ‘rabbit in the headlights’ fear. By the time I loaded myself up on departure day and boldly decided to schlepp to Heathrow on public transport with all my kit, I was a sweaty-palmed & ever-so-slightly gibbering mess.

It felt like I had never travelled solo overseas before.

So – how was it all? How did I manage in the big wide South American world facing all those fears?

I have learnt in life, both travelling and stationary, that a little fear sharpens your senses. If you are switched on to the risks and have done the best assessments in your head then perhaps you can alleviate the pitfalls to your best ability. As long as you don’t cripple yourself with fear on the way! I have long purported that if you really believe the worst will happen then it will probably come to pass in some form.  But I also know from my professional life that it pays to think things through first and try to anticipate where things might get tough, so you can be prepared to avoid or to conquer. And I did!

Ok, so I fell out of the panga into a foot of Galapagos surf once! To be honest, I expected to do this at least 3 times so I brought it on by self-coersion. But I got up giggling and shrugged it off (once I ensured that my camera was still dry) and I earned the reputation of having a resilient and positive character. The very same day, I was snorkelling with reef sharks, sea tortoises & sea lions.

…this was our Galapagos guide’s catchphrase and he couldn’t have been more right! 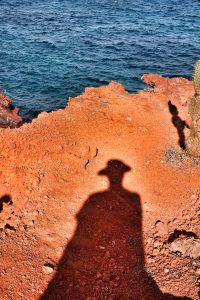 A mantra to live by when travelling …….and always.

The Journey to Self