Struggling to calibrate my dragging body sensations of altitude (compounded by an incredibly early start to my day!), I rallied my thoughts to acknowledge just ‘where’ in the world I was currently travelling. I was on a bus in far northern Chile; only a few kilometres away was Bolivia! This was not a time to feel feeble and to close my eyes to the world outside. As we bounced along dusty, rutted roads I began to take notice of the landscape outside.

Since we had arrived under the veil of darkness, I had no real sense of what we had traversed only hours earlier. My first impressions were of a slightly lunar terrain of dry red soils and tufted grasses which formed interesting, regular crescent patterns. Rocks seemed abundant, strewn with abandon across rolling plains and into foothills of impressive ranges dusted at times with snow. It was a bizarre feeling to see all this desert dryness and yet have an impression of mountainous altitude. This surely should feel more alpine in a traditional sense? As often happens when I travel in new terrains, I sought the echo of somewhere I’d been before – it satisfies a schoolgirl fascination for geography, combined with my innate desire to see patterns in the world. Here I saw a shimmer of Moroccan mountainscapes… something in the colours and the folds of the hillsides. On first impression, the groundcover was minimal and unexciting. It could easily be described as ‘barren’. But it wasn’t… not by a long shot. 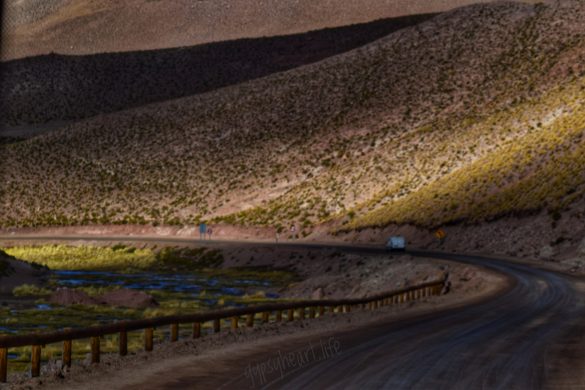 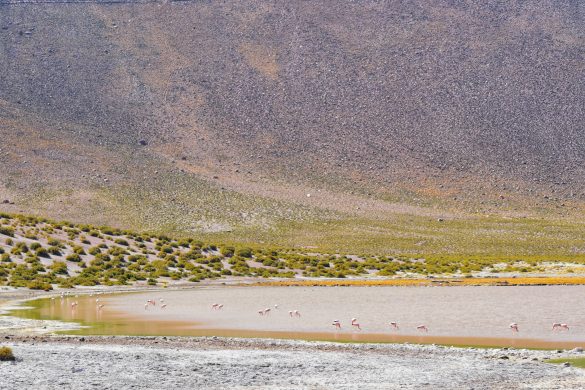 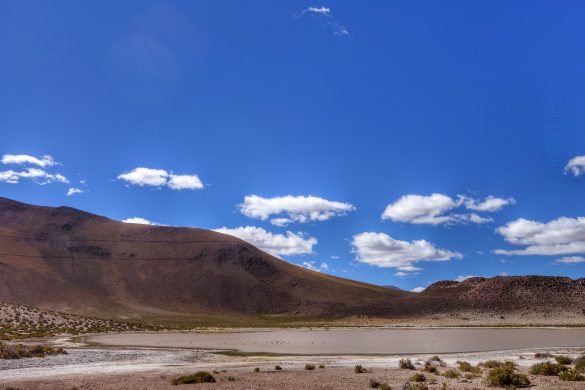 The palette here is so subtle in its vibrancy. Against the somewhat unwelcoming red earth sits the soft dusty lime green of the tufted grasses. From a distance – under shifting light – this adds a velveteen shimmer that softens the outlook.

As a cloud passes overhead and caresses the foothills, everything shifts and shapes.

Purples meet dusky pinks and sun bleaches the grasses. Rounding a bend, we passed a stretch of marshland, dotted with tussocks of vibrant grass whose hues are accentuated against the sparkle of water. This is, in turn, is brightened by the reflection of the sky stretching above us. A clear, cerulean blue punctuated by perfect caricature white clouds that scoot brightly in the direction of new adventure. 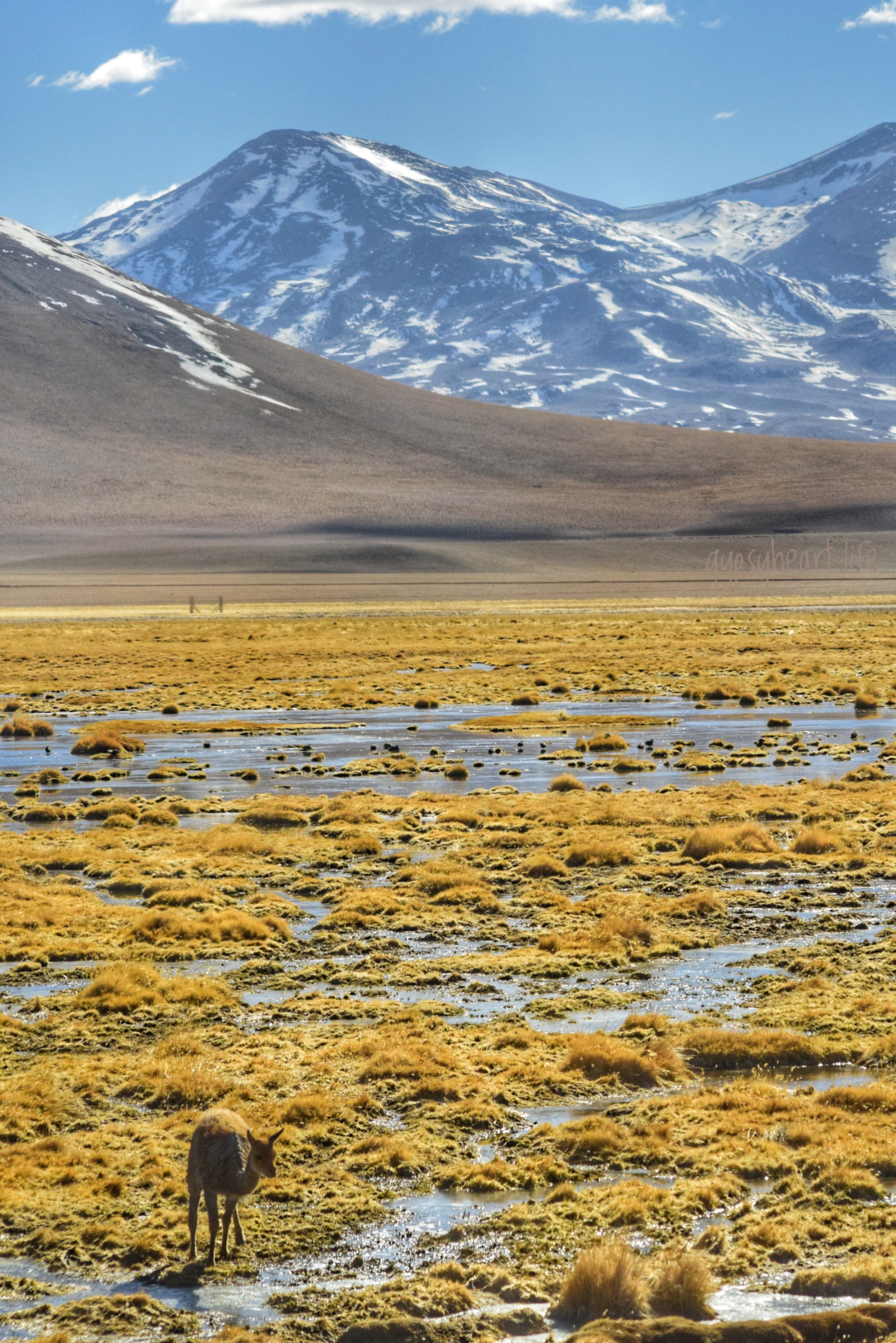 As my eyes grew accustomed to the vistas and my head began to ignore the bodily feelings that abounded, I began to appreciate the majesty here. Grazing quietly in seeming solitude against this massive backdrop, a dainty guanaco cropped at the grasses in between the watery expanses. Over the next few weeks I became almost blaze about spotting members of the Sth American camelid family, but my first sighting of a wild animal in its habitat is always a reminder of the pleasure of travel. These guanacos are a member of the group that only appear in the higher altitudes, thus rarer to see. Later, as we passed through the steep sides of a pass between mountains, a faint movement among the busy stony slopes gave away the presence of a viscacha – the local equivalent of a rabbit. These large rodents seem to survive on very little in the midst of nowhere. It is hard to fathom, but for a creature designed for such climes, this is no doubt a rich home.

Our first stop was at the Vado del Rio Putana – a wetland reserve nestled in the curve of the road at the base of Volcan Putana.

All of a sudden we were confronted by a wealth of birdlife. Native coots, ducks, gulls, geese all happily share a shallow arc of marshy water punctuated by miniature, grassy islands. Around us there was nothing but dry red earth littered with rocks  and broken only by the ribbon of graded road running in between. A welcome stop here to stretch legs and take in the landscape. 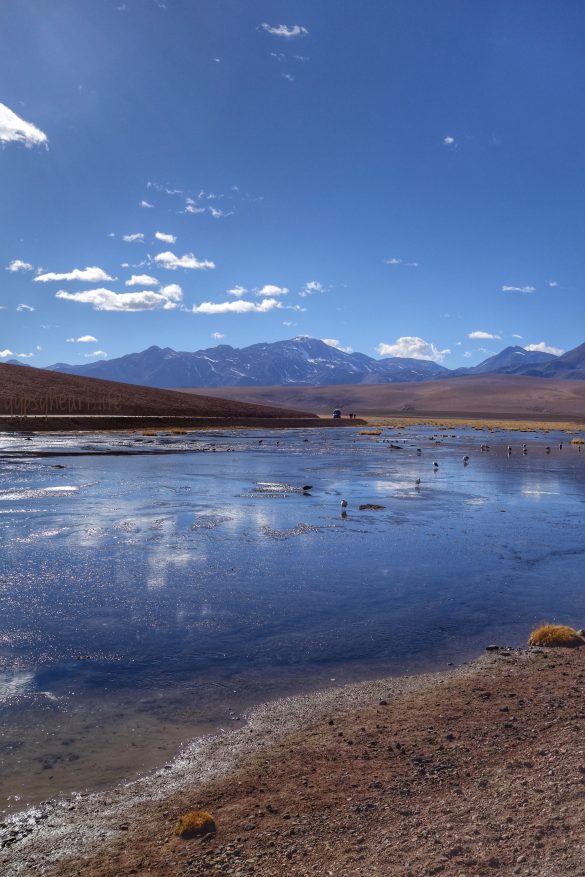 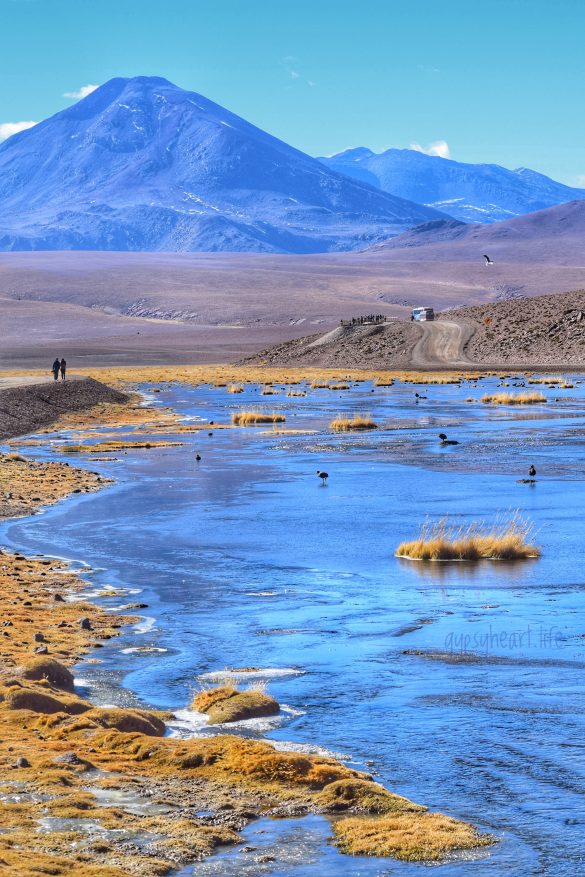 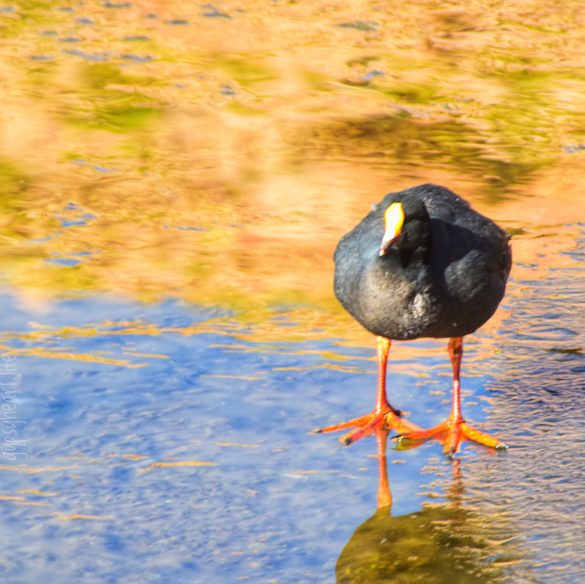 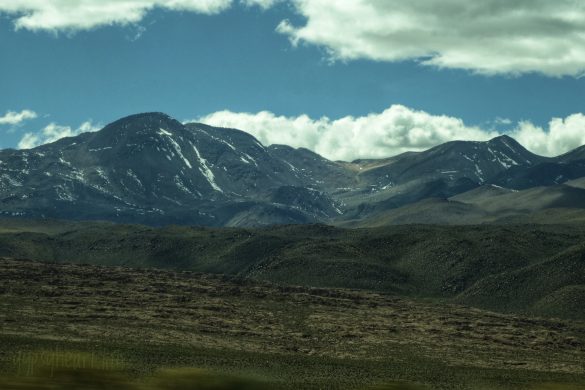 The Andes from northern Chile 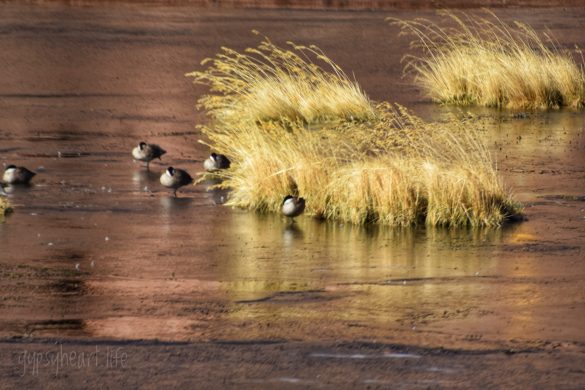 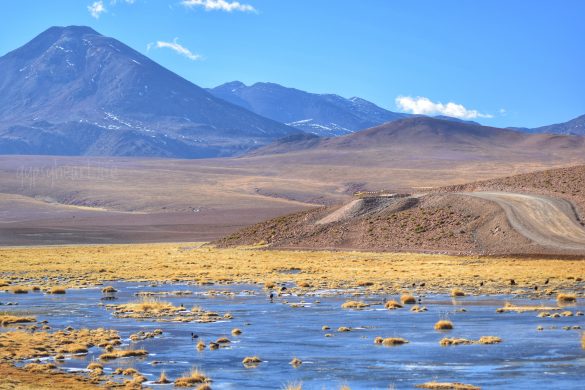 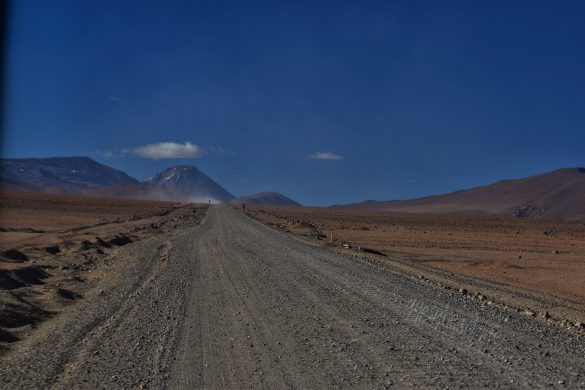 The long road back to San Pedro de Atacama

Almost back to San Pedro, the bus also takes a scheduled stop at the tiny township of Machuca. As we crested a rise in the road and looked down, we saw 3 rows of simple houses and a pretty church set above the village in an adobe walled compound. We spilled out of the bus and all wandered off to explore. Despite the lure of a llama brochette being barbecued by a smiling local, I decided to make a closer inspection of the church and picked my way across the road and up the rise. Once again I was stonkered by the effort. It took all of my allocated 45minutes to feebly make my way up an unnassuming slope and into the corral around the building! But the beauty of a simple church always takes away the strain of travel for me. A brightly coloured altar was crowded with naive icons and offerings of synthetic flowers. A few simple wooden pews offered contemplative welcome. Outside, a crude wooden, wool-bound cross sat on the roofline against the thatch and the sky. Whitewashed buildings against adobe red walls splashed with blue doors – the simple beauty of colour made this place sing. Sometimes it is hard not to feel that you are in a filmset or a painting, when one finds vistas that feel so in keeping with the mental images of faraway places from your readings and research. 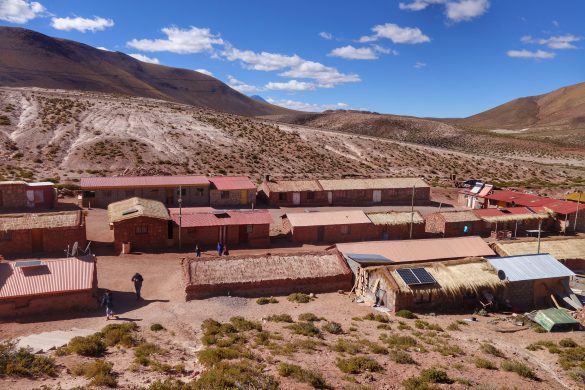 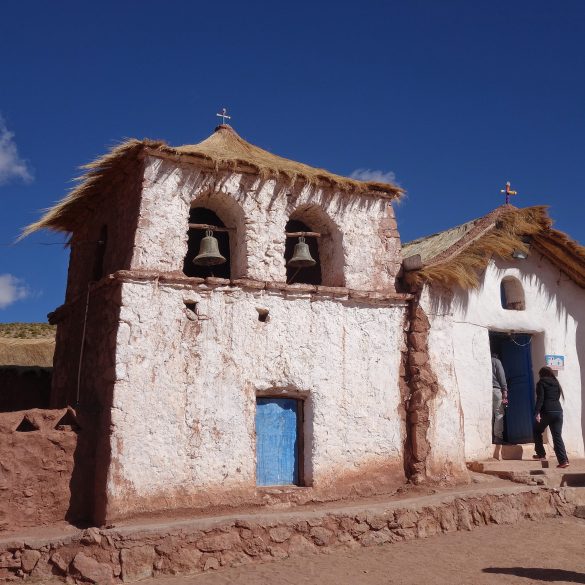 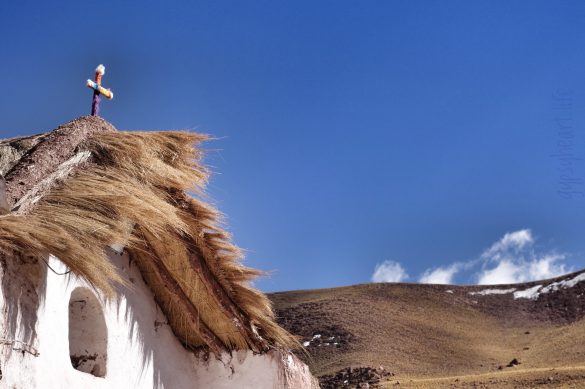 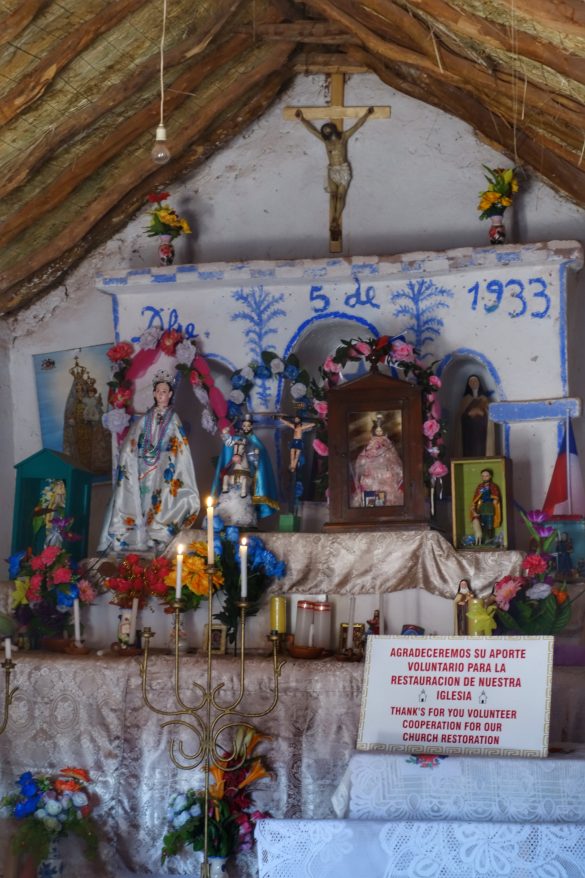 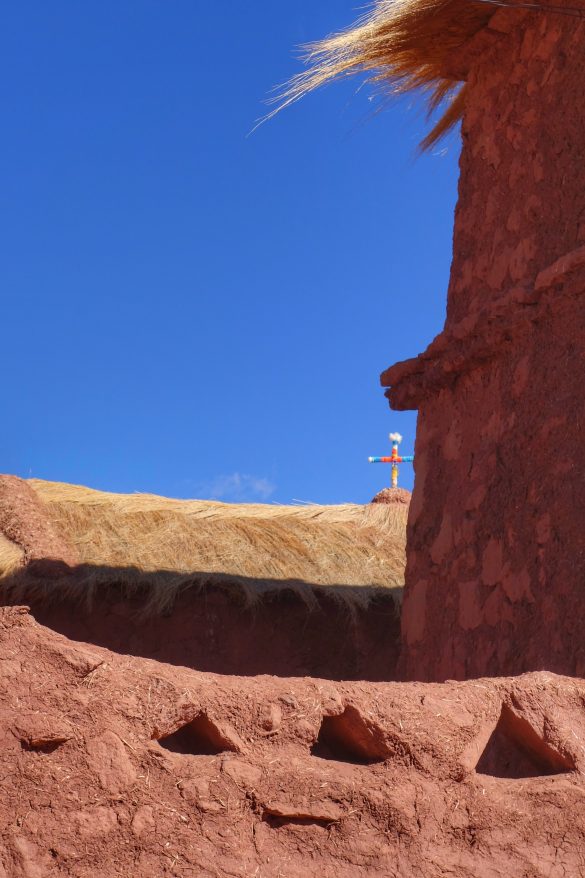 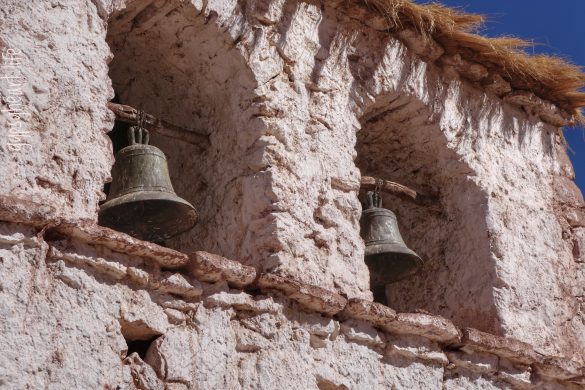 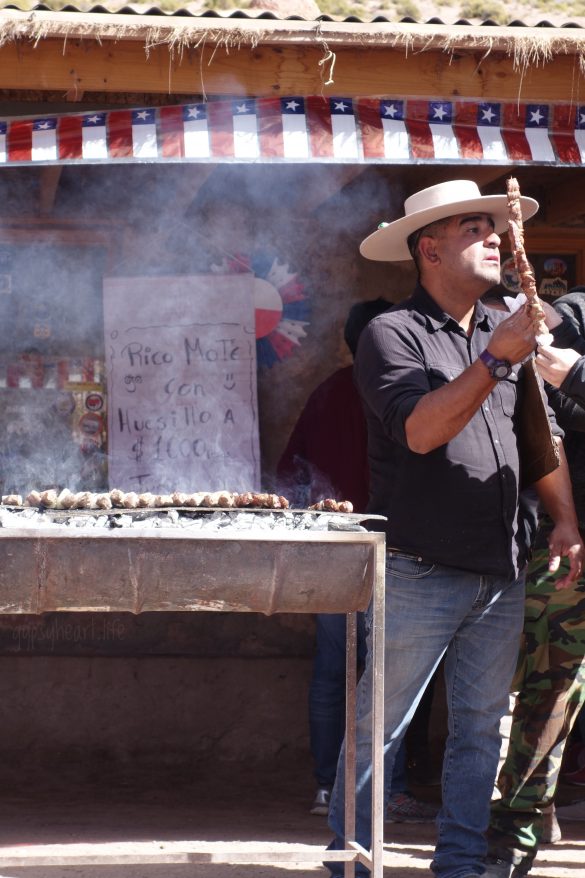 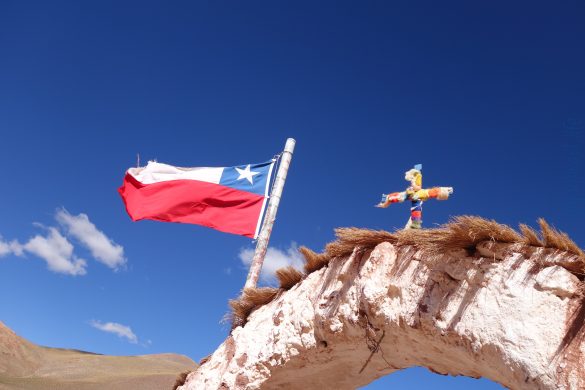 Picking my way back to the bus with a sense of great exhaustion, I settled in for the ride back to our little oasis in San Pedro. As the road wound back to a lower altitude, my senses reset and the day stretched ahead with promise of more wonder. My South American adventure was just beginnning! Not long now and I would venture into the wilds of the Bolivian salt flats. 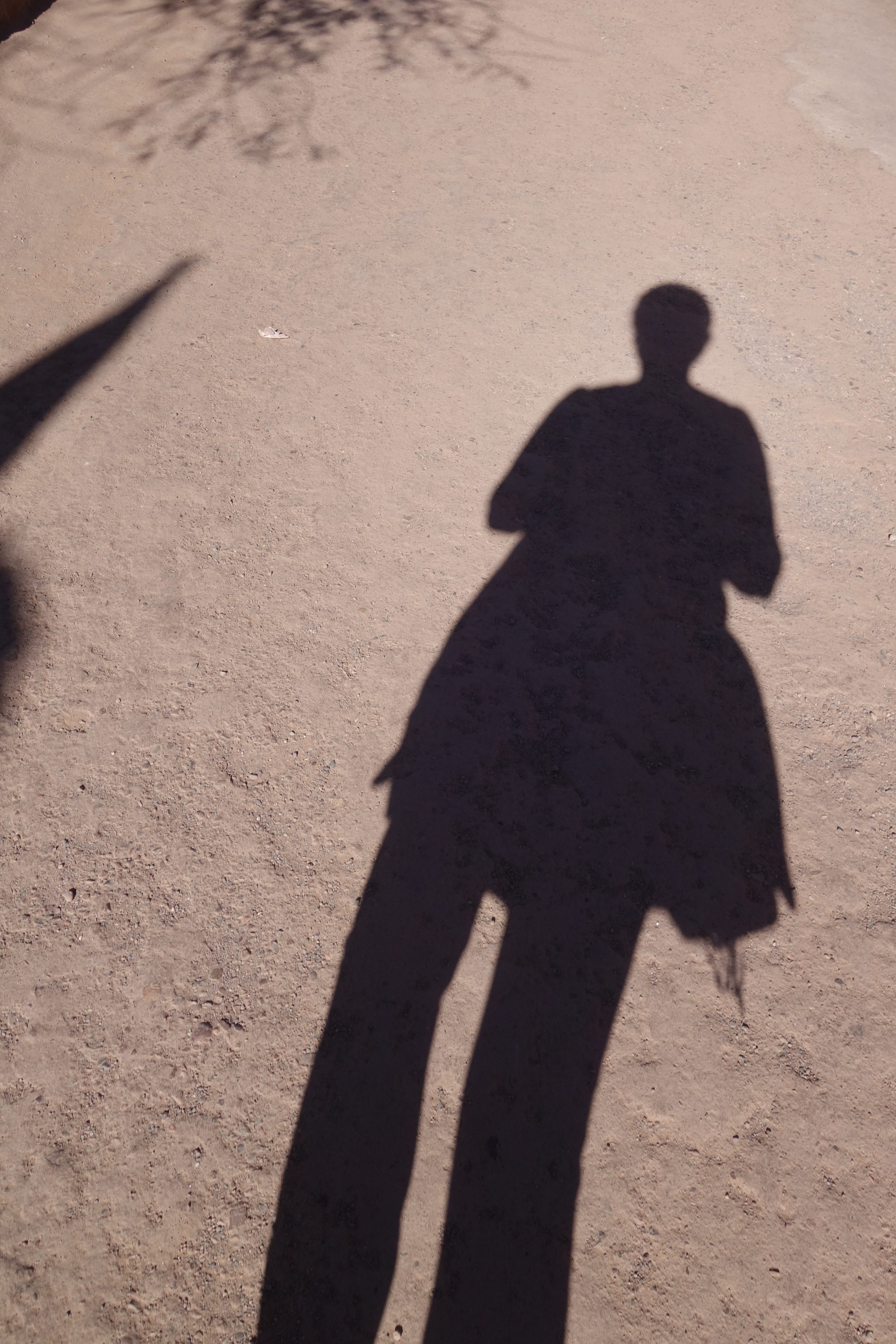 Then the natural wonder would truly begin!

Until then – breath deeply in your world.

Reflections on a familiar landscape